Hungary to put 24 MiG-29s up for sale to public 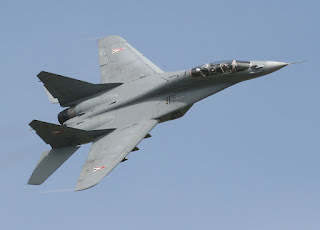 The Defense Ministry has proposed that MNV sell the aircraft in this way after a recent tender for eight of the decommissioned fighters at a minimum total price of HUF 3.5 billion attracted only eight invalid bids.
Twenty spare engines for the aircraft were sold in the above tender, the newspaper noted.
The Defense Ministry noted that the proposed public sale of the MiG-29s does not mean that "the Hungarian state or the Defense Ministry would like to get rid of the airplanes at any cost, though this possibility ensures greater room for maneuver in the sale of the aircraft."
Népszabadság noted that the Russians have the contractual right to approve the purchase of the MiG-29s, which could represent a political impediment to MNV's sale of the jet fighters.
read more
Publicado por Miragec14 1 comment:

ON THE ROAD AGAIN

ON THE ROAD AGAIN
Publicado por Miragec14 No comments: