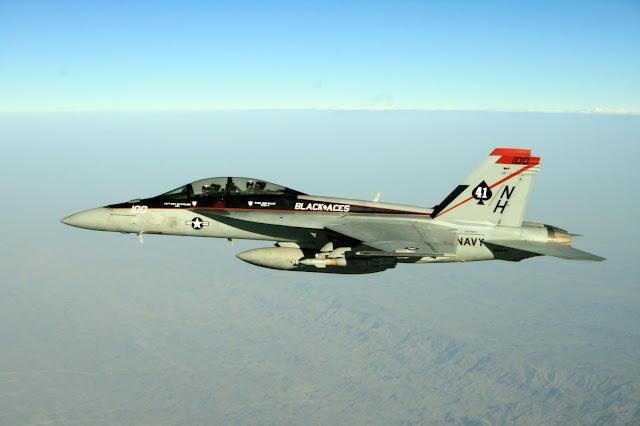 Canada will explore an interim buy of 18 Super Hornet fighter jets from Boeing, a blow to Lockheed Martin that kicks a final decision on whether to procure the F-35 further down the road.
"Canada will immediately explore the acquisition of 18 new Super Hornet aircraft to supplement the CF-18s until the permanent replacement arrives," the Canadian government announced in a release. "Canada's current fleet is now more than 30 years old and is down from 138 aircraft to 77. As a result, the Royal Canadian Air Force (RCAF) faces a capability gap."
Canadian Defence Minister Harjit Sajjan said Canada will launch a larger fighter competition next year, after it wraps up its defense policy review. But the competition will likely take about five years, which kicks the decision into the next administration. Liberal Party Prime Minister Justin Trudeau had vowed not to buy the F-35 joint strike fighter.
"We have a capability gap. We have selected the minimum number of aircraft to meet this capability gap here. At the same time, we are launching a full competition and making sure that we take the appropriate time, without cutting corners to get the right airplane," said Sajjan.
"Boeing is honored to provide the Royal Canadian Air Force with the only multi-role fighter aircraft that can fulfill its immediate needs for sovereign and North American defense," the company stated in a news release. "The Super Hornet's advanced operational capabilities, low acquisition and sustainment costs, and Boeing's continued investment in the Canadian aerospace industry — US$6 billion over the past five years alone — make the Super Hornet the perfect complement to Canada's current and future fighter fleet."
Meanwhile, Lockheed Martin was less pleased with the decision, restating its hope that the Canadian government would ultimately purchase the fighter.
“Lockheed Martin recognizes the recent announcement by the Government of Canada of its intent to procure the 4th generation F/A-18 Super Hornet as an interim fighter capability,” the company said in a statement. “Although disappointed with this decision, we remain confident the F-35 is the best solution to meet Canada's operational requirements at the most affordable price, and the F-35 has proven in all competitions to be lower in cost than 4th generation competitors. The F-35 is combat ready and available today to meet Canada's needs for the next 40 years.”
Further down the road, Lockheed could strip Canadian industrial participation — which totals 110 Canadian firms with $750 million in contracts, according to Lockheed —should the country ultimately opt not to by the F-35. The company has not signaled whether it would be willing to do so.
defensenews
Publicado por Miragec14 No comments: 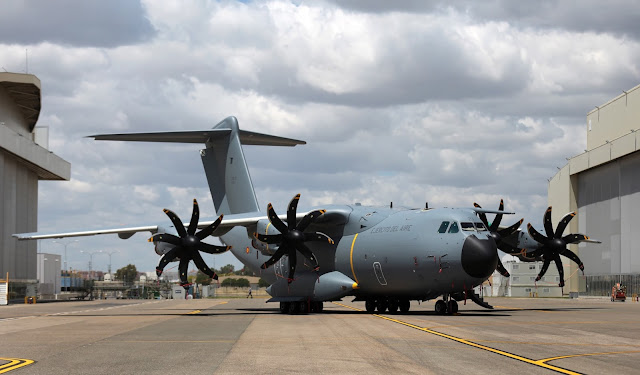 Airbus Defense and Space has delivered the first of 27 Spanish-made A400M airlifters to the Spanish air force.
The aircraft was delivered during a brief ceremony at the A400M final assembly line in Seville, Spain.
With the handover Spain became the sixth country to have received the A400M.
It will replace the Spanish Air Force's aging C-130 cargo aircraft type. It can also be used as a tactical air-to-air tanker.
Airbus is to deliver 14 aircraft to Spain by 2022. The remaining aircraft are slated for delivery from 2025.
upi
Publicado por Miragec14 No comments:

Serbia in Talks With Russia over Acquisition of Six MiG-29 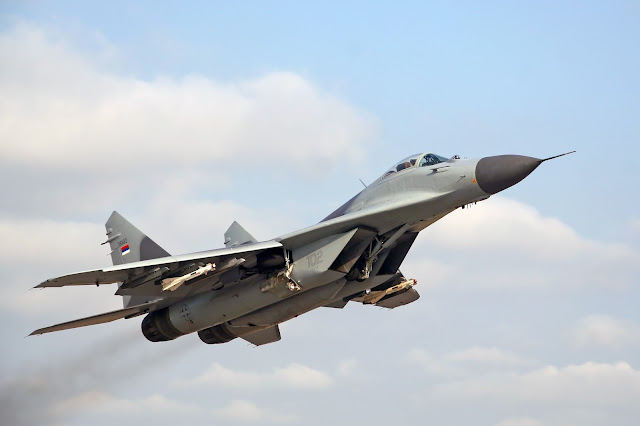 The Serbian government is in talks with Russia over a potential acquisition of six Mikoyan MiG-29 fighter jets and an undisclosed amount of armored vehicles.
The discussed procurements are to intensify Serbia’s military cooperation with Russia, which also offered to sell Belgrade Buk anti-aircraft missile systems on mobile launchers. However, Serbian officials said they cannot afford to purchase the systems, which cost about $60 million per battalion, a government source in Belgrade told local daily Vecernje Novosti.
The Serbian Ministry of Defence considers acquiring new aircraft as one of its top procurement priorities, as the Serbian air force's existing fighter jet fleet is expected to lose its operational capacity in the next two to three years. Should Belgrade decide to obtain the MiG-29s from Moscow, the aircraft are to be overhauled and modernized by the Russian defense industry under a deal estimated to be worth about $50 million.
defensenews
Publicado por Miragec14 No comments: 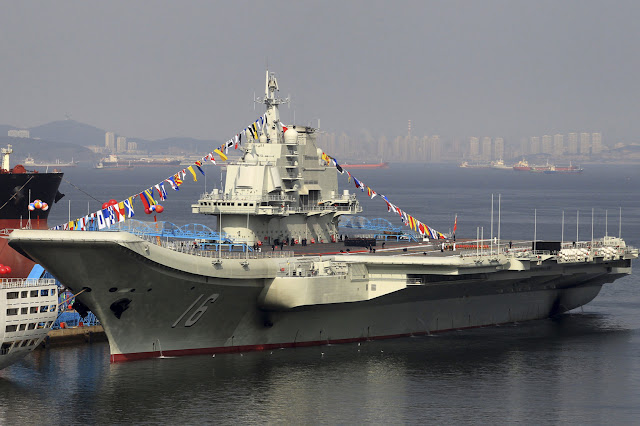 China's first aircraft carrier is now ready to engage in combat, marking a milestone for a navy that has invested heavily in its ability to project power far from China's shores.
The Liaoning's political commissar said in an interview with Tuesday's Global Times newspaper that his ship is "constantly prepared to fight against enemies," signaling a change from its past status as a platform for testing and training.
Senior Captain Li Dongyou's comments appear to indicate that the ship has taken on its full aviation complement. Purchased as an incomplete hull from Ukraine more than a decade ago, it was commissioned in 2013.
China hasn't described specifically how it intends to use the Liaoning, but it is seen as helping reinforce China's increasingly assertive claims in the South China Sea in the face of challenges from the U.S. Navy and others.
militarytimes
Publicado por Miragec14 No comments:

Combat Training Yak-130 of Myanmar Made its First Flight 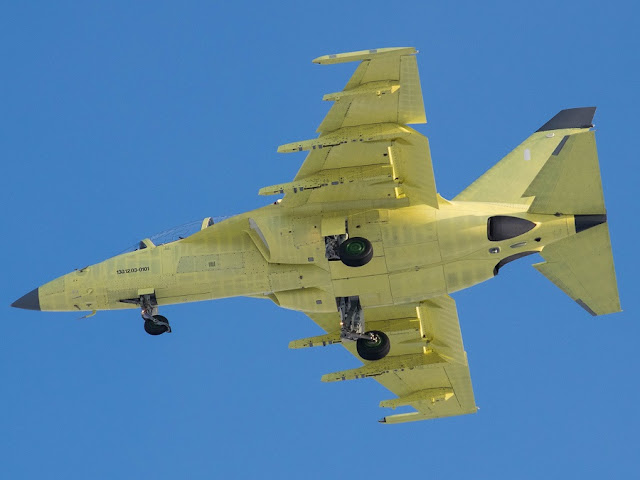 The first Yak-130 advanced jet trainers for Myanmar Air Force first flew in Irkutsk.
Combat training aircraft Yak-130, built by an aircraft factory "Irkut" Corporation, it was designed as an advanced trainer aircraft and has light strike capability.
Took to the skies over Irkutsk, Yak-130 has an "export" serial number and is intended for delivery to Myanmar under the contract in 2015. Myanmar should get about ten of these aircraft, the first three aircrafts under the contract will be delivered up to the end of 2016.
Myanmar will become the fourth foreign buyer of Russian combat training aircraft Yak-130, also bought Algeria, Bangladesh and Belarus.
defense-studies
Publicado por Miragec14 No comments: 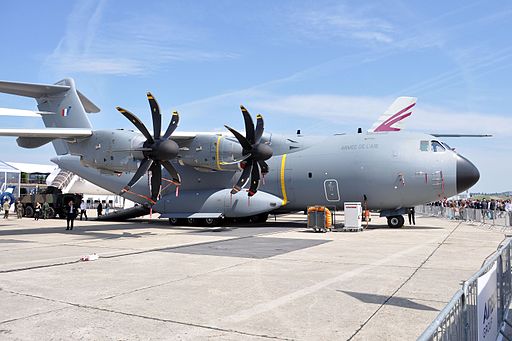 French officials are in tough talks with Airbus Defense & Space for a timely delivery of a more capable “tactical” version of the A400M military transport plane, French Defense Minister Jean-Yves Le Drian said.
“The problem is the company,” Le Drian told the defense committee of the lower house National Assembly on Nov. 2, the official minutes of which were recently released. “Today, the A400Ms delivered are not operational – and the problem does not concern just France: that is the case everywhere.
“As this meeting is public, perhaps my remarks will reach Mr. Enders. It can be said that the talks I have with the Airbus executives are … lively.”
Tom Enders is chief executive of Airbus group. The Air Force is flying the A400M in its basic version as a cargo plane into secure airbases.
“I have asked for a plan to catch up, both for the aircraft’s capabilities and delivery rate,” Le Drian told members of parliament. The delivery delays were unacceptable and the lack of capabilities for parachute drops, self defense and landing on short runways caused concern.
The ministry has reached an agreement for 2016, he said. “I hope it will be upheld,” he said. “In any case, we have an extremely close dialog with the company.”
France had ordered four Hercules C-130J transport planes to meet urgent requirements and tackle the problems of an aging fleet, but that purchase had not been planned at the outset, he said.
The French Air Force expects to receive by the end of the year six A400Ms of the “tactical” version, Air Chief of Staff Gen. André Lanata told the French Senate Foreign Affairs, Defense and Armed Forces Committee on Oct. 12. Parachute drops are key to that tactical model, he said.
A tactical model is equipped with a protected cabin and a self-defense system to protect the aircrew and aircraft when flying over hostile zones.
“We expect the company concerned to make every single effort to allow us to undertake our very many operational commitments,” Lanata said.
The A400M engine is now the major concern for the service, as the motors require an inspection every 80 hours, an unsustainable rate leading to fleet availability shortages, he said.
An interim solution to the engine will be delivered between now and Spring 2017 until a permanent remedy is ready, which will make the situation manageable – which it is not right now, he said.
Airbus D&S declined comment on the issue.
Of the six tactical aircraft, three will be new units and three will be retrofits of the A400M aircraft already in service with the Air Force. The service flies eight of these as cargo lifters into secure areas.
defensenews
Publicado por Miragec14 No comments: