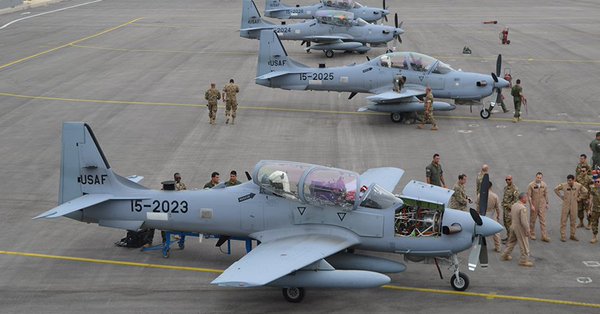 The army's Air Force on Tuesday afternoon took over the second batch of the four super-Tucano planes, a donation from the US authorities in favor of the Lebanese army.
lebarmy
Publicado por Miragec14 No comments:

Germany near to lease five Heron TP, To Be based in Israel, only for Intel missions

Germany — Government leaders are close to winning parliamentary approval for the country’s first weapons-capable drone, pitching a plan this week to lease the aircraft now and negotiate for the missiles later.
The plan is to lease five aircraft from manufacturer Israel Aerospace Industries, managed by Airbus under a contract to be finalized in June. The fleet would be stationed in Israel and, lacking missiles, simply provide intelligence for German forces.
The deal with industry includes having the aircraft available for deployment into a conflict zone within two years of contract signing.
The Heron TP is something of a trial balloon for Germany in the field of armed drones. An envisioned joint European drone project — with Germany, France, Italy at the core — is widely expected to produce a strike-capable unmanned aircraft by roughly the middle of the next decade. Still, officials are making a distinction in the so-called “Eurodrone” program, arguing that the base configuration will include a reconnaissance capability only, to be augmented by weapons if national policy permits it.
General Atomics last year fought, but lost in court, the Berlin government’s decision to effectively sole-source the drone deal to Israel without giving the U.S. company a chance to bid.
defensenews
Publicado por Miragec14 No comments: 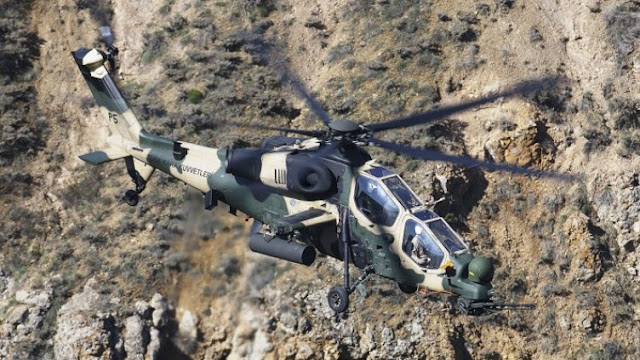 Pakistan has formally signed for 30 TAI T129 attack helicopters from Turkey, it was disclosed on 24 May.
The confirmation of the anticipated sale to Pakistan was made in the political manifesto that Turkey’s ruling Justice and Development Party (AK Parti) has released ahead of the general election scheduled for June. The manifesto states that “a very short while ago a contract for the sale of 30 attack helicopters was signed with Pakistan”.
Pakistan is known to have evaluated the Turkish-built version of the AgustaWestland A129 Mangusta as part of an ongoing effort to procure a new attack helicopter for the country’s army. With the Pakistan Army having already ordered 12 US-built Bell AH-1Z Vipers, it had since 2014 been trialling the Chinese-built Z-10 and since 2016 the T129.
Gareth Jennings, London - IHS Jane's Defence Weekly
Publicado por Miragec14 No comments: 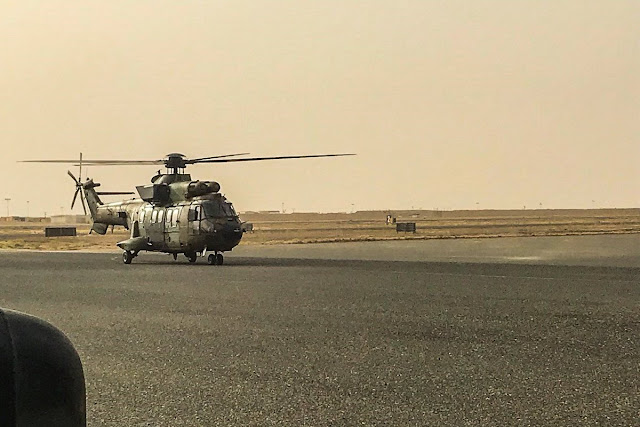 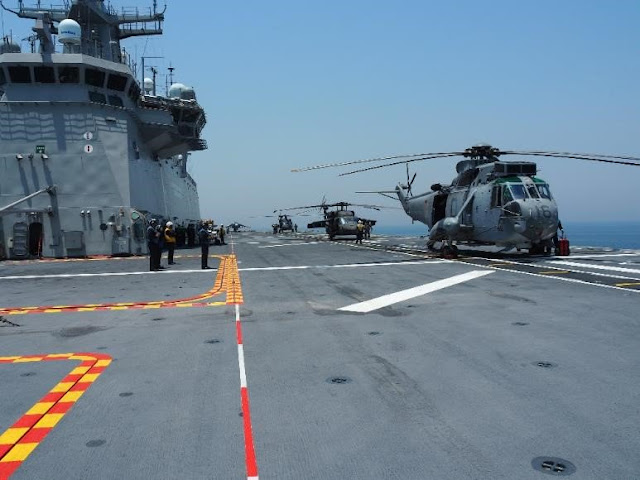 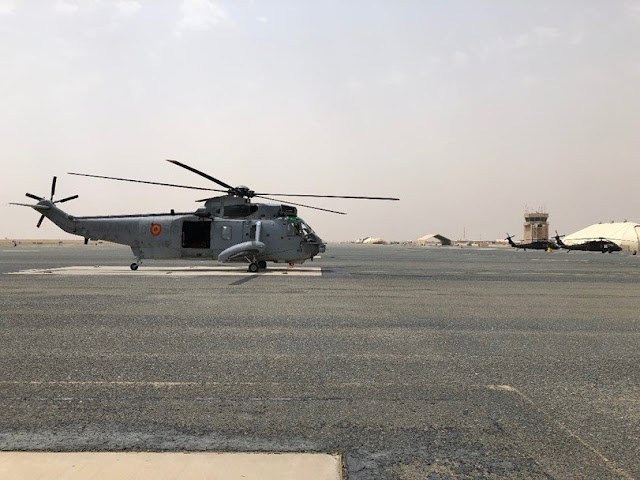 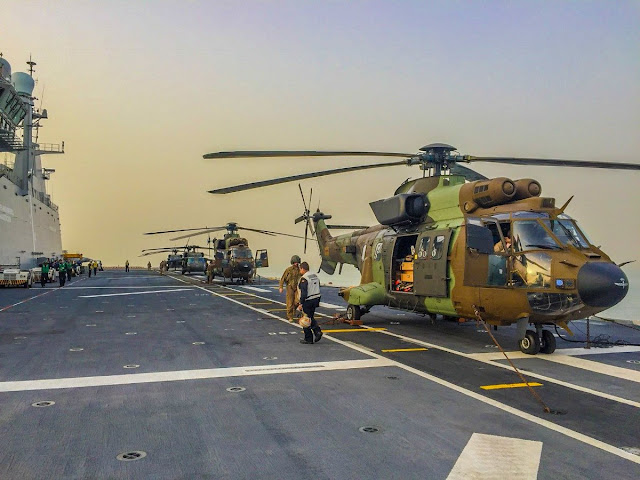 AS532 "COUGAR" EJÉRCITO DE TIERRA
Spanish Navy Flagship Aicraft Carrier 'Juan Carlos I', arrived in Kuwait carrying three CH-47D Chinook and two AS-532 Cougar in support of Operation "Inherent Resolve" in Iraq, according EMAD.
The unit will operate out from iraqi city of Taji, carrying out transport missions between, Bagdad, Besmayah and Taji and is under command of Gala Gallego, from Batallón de Helicópteros de Maniobra IV (Bhelma IV).
The Spanish Helicopters will support Spanish Forces deployed in Iraq, and another from International Coalition against Daesh.
Juan Carlos I, is being scorted by ESPS 'Blas de Lezo' Type F-100 frigate.
diariodecadiz
EMADmde
EMADmde
Publicado por Miragec14 No comments: 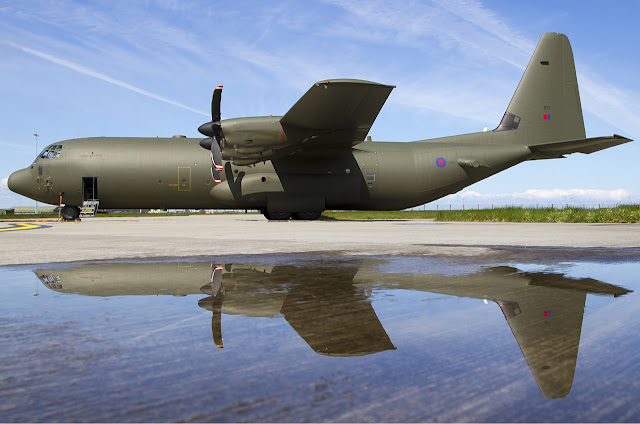 The U.S. State Department has cleared the potential sale of three C-130J-30 Super Hercules airlifter and three KC-130J tankers to Germany.
The aircraft are meant to help the German Air Force conduct airlift, air refueling and air drop missions as part of a French-German allied squadron based in Evreux, France. The C-130Js would provide crucial air refueling capability to German and French fighter and light transport aircraft, as well as helicopters, according to the annoucement.
defensenews
Publicado por Miragec14 No comments: 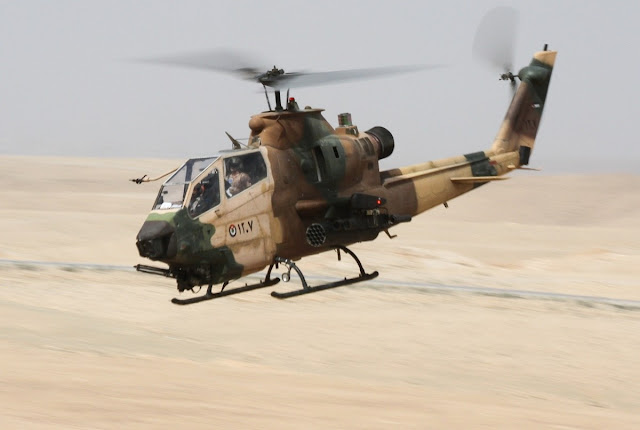 The Philippines has confirmed it is to receive used U.S.-built Cobra helicopter gunships donated by Jordan, marking the first time the country will operate dedicated attack helicopters.
The helicopters were offered to the Philippines sometime in 2017.
Jordan had initially offered to donate four helicopters to the southeast Asian country, although this was later reduced to two. Jordan had earlier donated at least three Cobra helicopter gunships to Kenya from its fleet of almost 50 Cobras, which include ex-U.S. Army helicopters acquired in 2001 and 15 more from neighboring Israel in 2015.
The AH-1F Cobras being donated to the Philippines are capable of utilizing guided anti-tank missiles. The country has already taken delivery of the Israeli Rafael Spike Extended Range missile for its Navy’s fast-attack craft and selected the Spike Non Line Of Sight for its Leonardo AW159 Wildcat naval helicopters,
As such, integrating the Spike, which is already being used on Israel’s Cobra helicopters, would appear to be the likely route for the Philippines when funding is available.
The Philippines has been battling insurgencies on several fronts, including a five-month-long battle with Islamic State-linked militants who seized control of the city of Marawi in the southern Philippine island of Mindanao in May 2017.
The military took back the city after a protracted urban battle with the help of manned and unmanned surveillance and reconnaissance aircraft from the U.S. and Australia.
During the battle, the Philippine Air Force conducted airstrikes using fixed-wing aircraft along with Leonardo A109E utility and Hughes MD-520MG light-attack helicopters, although the use of unguided bombs, rockets and gunfire resulted in several instances of friendly fire casualties when troops were accidentally hit by airstrikes while in close contact with the militants.
Mike Yeo - defensenews
Publicado por Miragec14 No comments:

US drones being based in Greece for the first time 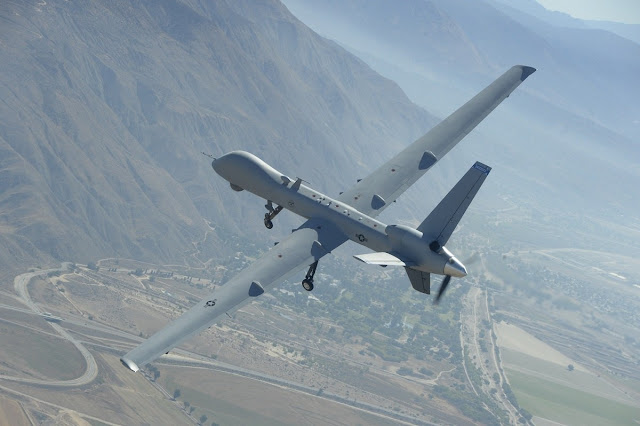 The U.S. Air Force has begun using MQ-9 Reaper drones out of Larisa Air Force Base, located halfway down Greece’s eastern side, near the Aegean Sea.the aircraft are being temporarily stationed at Larisa while their usual base in Africa undergoes repairs.
The drones are being stationed at Larisa under the aegis of an existing joint training order between the two nations.
defensenews
Publicado por Miragec14 No comments: 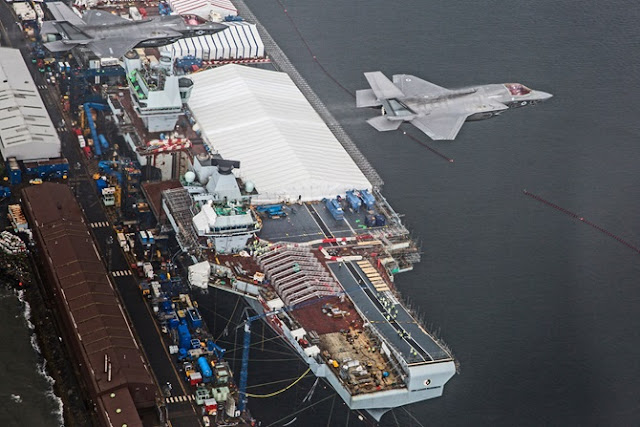 Four F-35Bs will arrive in the first tranche of stealth fighters to transfer from the USA to the UK, flying into RAF Marham in East Anglia.
The Norfolk air base will be the home of the Lightning Force – when the strike fighters are not embarked on HMS Queen Elizabeth and Prince of Wales.
Two Royal Navy and two RAF pilots will be at the controls of the multi-million pound aircraft for the transatlantic flight; they are assigned to the newly-reformed – and legendary – 617 Squadron, the Dambusters.
royalnavy
Publicado por Miragec14 No comments: 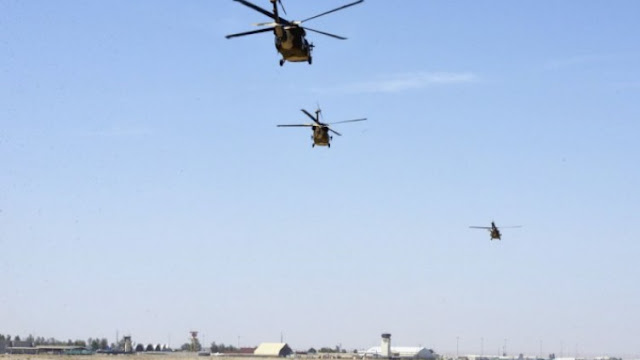 The Afghan Air Force (AAF) flew its first operational mission with its recently acquired Sikorsky UH-60 Black Hawk helicopters on 7 May.
The mission, which was disclosed by the 438th Air Expeditionary Wing, saw at least three helicopters fly in support of Afghan provincial elections.
The AAF is set to receive 159 Black Hawks by 2020 as the United States transitions the country’s armed forces over from its approximately 80 Russian-built Mil Mi-17 ‘Hip’ helicopters that are nearing the end of their service lives. To date, eight have been received over two batches in September 2017 and January 2018, with the first six pilots having graduated from training in November 2017.
Before entering into Afghan service, these former US Army aircraft first undergo a major refurbishment and upgrade.
janes
Publicado por Miragec14 No comments: 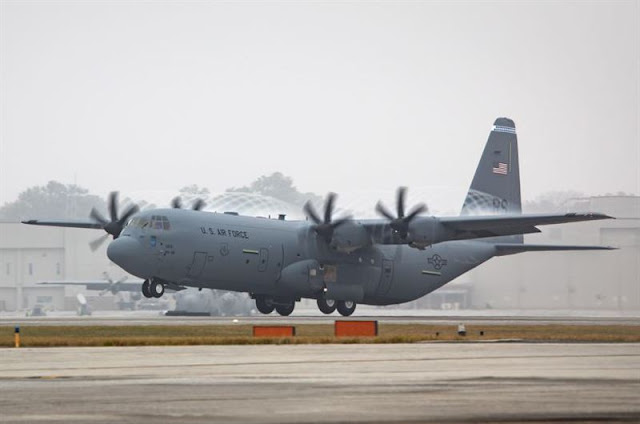 The US State Department approved the sale of six Lockheed Martin C-130J Super Hercules transport and tanker aircraft to Germany for an estimated $1.4 billion, according to the Defense Security Cooperation Agency.
The approval comes as the aircraft’s larger European competitor, Airbus Defence & Space’s A400M transport aircraft, has struggled with production issues and has ramped down its delivery rate. Germany is a launch customer for the A400M, along with European NATO nations Spain, Belgium, Britain, France, Luxembourg and Turkey.
Lockheed Martin’s potential sale includes three C-130J-30s, the stretch version of the aircraft, and three KC-130Js, the aerial refueling version of the aircraft.
flightglobal
Publicado por Miragec14 No comments: 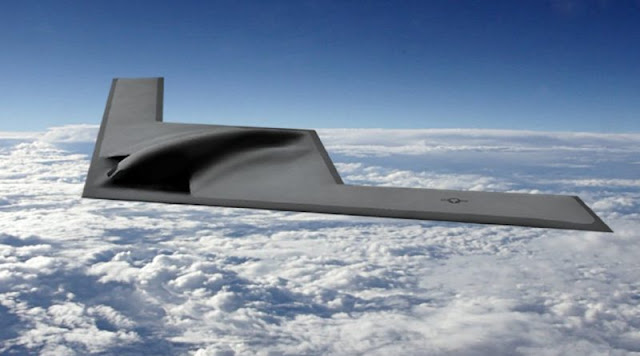 The Air Force has identified Ellsworth, Dyess and Whiteman Air Force Bases as the upcoming homes for the in-development B-21 Raider long-range stealth bomber.
The U.S. Air Force says bases in Missouri, South Dakota and Texas will receive the next-generation B-21 bomber to replace existing aircraft starting in the mid-2020s.
The Air Force said Wednesday that Dyess Air Force Base in Texas, Ellsworth Air Force Base in South Dakota and Whiteman Air Force Base in Missouri have been chosen as “reasonable alternatives ” to host the new B-21 bomber.
Officials are expected to make a final basing decision in 2019 after compliance with the National Environmental Policy Act and other regulations. The B-21 is to replace B-1 and B-2 aircraft.
airforcetimes
Publicado por Miragec14 No comments:

Email ThisBlogThis!Share to TwitterShare to FacebookShare to Pinterest
Etiquetas: B-21, Raider, USAF 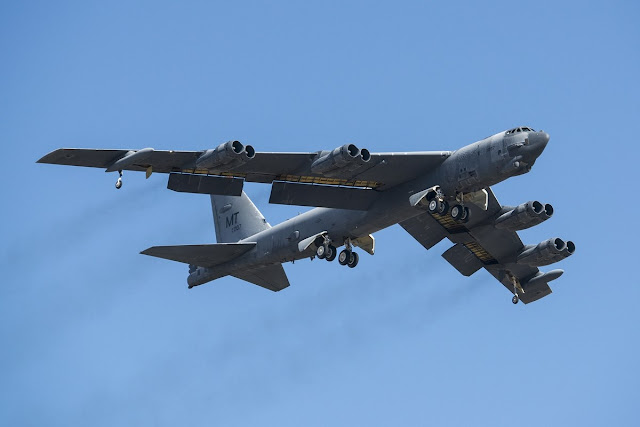 The Air Force on April 24 flew B-52H Stratofortress bombers to the South China Sea as part of a training mission.
Pacific Air Forces spokeswoman Lt. Col. Megan Schafer said the B-52s took off from Andersen Air Force Base in Guam, where they conducted a training mission in the vicinity of the South China Sea. The bombers then flew to the Okinawa, Japan, area to train with American F-15C Strike Eagles before returning to Guam.
The bombers were among six B-52s the Air Force deployed to Guam from Barksdale Air Force Base in Louisiana in January.
airforcetimes
Publicado por Miragec14 No comments: 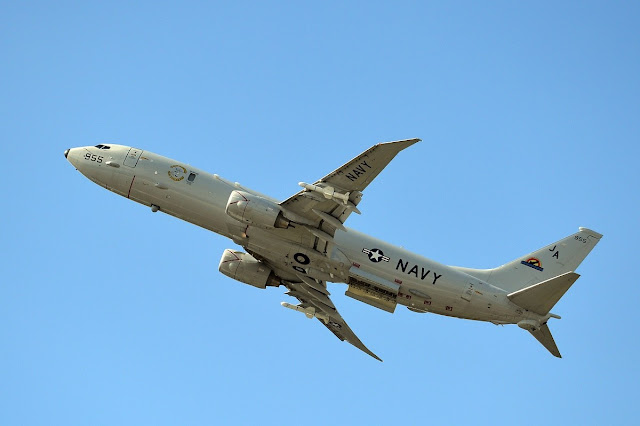 A P-8 Poseidon was intercepted by a Russian jet over the Baltic Sea on Tuesday. A Russian jet came within 20 feet of a Navy surveillance aircraft as it flew in international airspace over the Baltic Sea on Tuesday, CNN reported.
The intercept involving the Russian Su-27 jet and a Navy P-8 Poseidon was considered safe, but unprofessional. Tuesday’s intercept follows a January incident, when a Su-27 flew within 5 feet of a EP-3 Aries spy plane flying in international airspace over the Black Sea, forcing the American aircraft to fly through the Russian jet’s flight wash.
navytimes
Publicado por Miragec14 No comments: 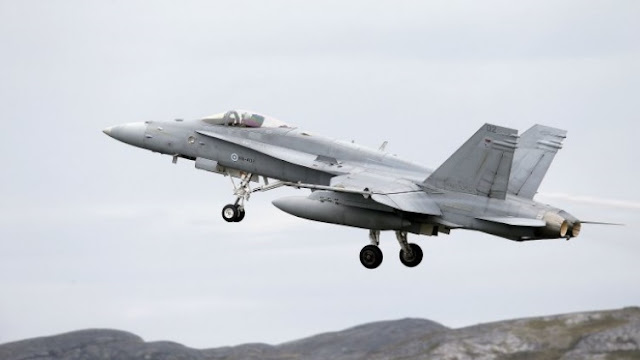 The Finnish government has issued a request for quotation (RfQ) to four nations in order to find potential bidders for Helsinki’s HX fighter replacement programme.
Finland has requested bids from France, Sweden, the United Kingdom, and the United States, all of which responded to the request for information that was issued in 2016.
Those bidding for the replacement of the Boeing F/A-18C/D Hornet fleet are Boeing with its upgraded F/A-18E/F Super Hornet; Dassault with the Rafale; Eurofighter with the Typhoon; Saab with the Gripen; and Lockheed Martin with the F-35 Lightning II Joint Strike Fighter.
The government is seeking 64 aircraft with weapons and sensors, alongside support, training systems, and spares.
“To reduce the risk involved in the integration of different systems, the tenderers are requested to provide comprehensive solutions meeting the operational requirements,” the government said in a statement.
Finland will begin to phase out its Hornet fleet from 2025, and a selection of the replacement is expected to be made in 2021.
The next phase following the RfQ issue is to begin in the second half of 2019, when final offers will be negotiated with each of the bidders. The final quotations would be requested in 2020, the government said.
The bids will be assessed based on the ability to meet five military scenarios: counter-air; counter-land; counter-sea; intelligence, surveillance and reconnaissance; and long-range strike.
janes
Publicado por Miragec14 No comments: