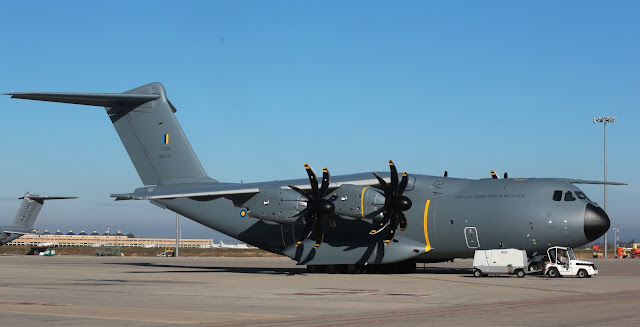 RMAF took official delivery of its third A400M airlifter at the Airbus Defence and Space facility in Seville.
It is yet to be determined when the A400M will fly to Subang airbase, the home of 22nd Skn, but based on previous two A400Ms, it is likely that the aircraft will make it home by July.
The 03 was supposed to be delivered in April but was delayed after engine and air-frame problems were in discovered in German and French A400ms.
RMAF had never officially confirmed whether its A400Ms were also affected by the problems but the first aircraft was seen in its hangar in early March with its engine panels opened.
The 22nd Skn currently operates two A400Ms, the first arrived in March, 2015 while the second in late December. The fourth and final aircraft is expected to be delivered by year end.
It is expected with the fourth A400M delivered, 22 Skn will ramped up its operational use of the air-lifters. Although the squadron had conducted test loading of Army vehicles, mostly 4X4s trucks, it had yet to conduct flights carrying them.
Currently, the two A400Ms of the 22 Skn mostly carry personnel and their belongings. The longest known trip so far is to Korat airbase in Thailand, in support of the Air-Thamal 2016, the annual exercise between RMAF and the Thai Air Force.
defense-studies
Publicado por Miragec14 No comments: