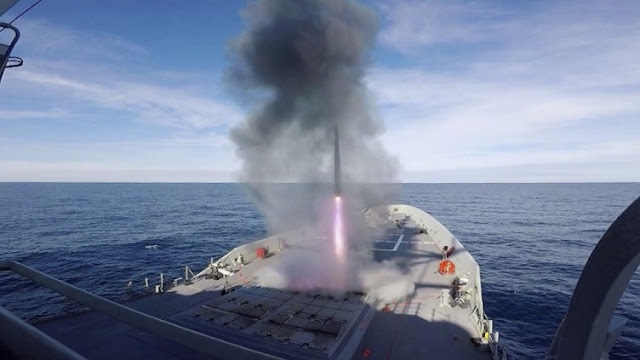 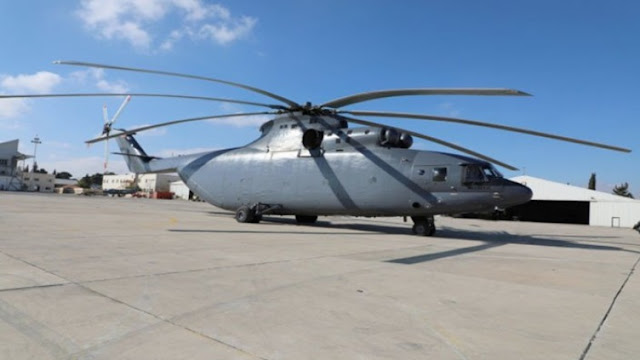 The Royal Jordanian Air Force (RJAF) has received into service the second of four Mil Mi-26 'Halo' heavy-lift helicopters from Russia, the service announced on 26 December.
An image of the Mi-26T was posted on the RJAF's official website some 11 months after the first was delivered to Amman in January.
Jordan ordered four of the current production-standard Mi-26T helicopters in September 2016, with two more under option. Deliveries are to run from 2018 through to the end of 2019, with the platforms to be operated jointly between the military and civil services.
While the first helicopter was shown at the SOFEX 2018 defence exhibition finished in the RJAF's current multi-tonal camouflage colour scheme, this second aircraft has been delivered in a low-visibility grey and is devoid of national markings. It is unclear if the different schemes denote the different military or civil roles.
Gareth Jennings-janes
Publicado por Miragec14 No comments: 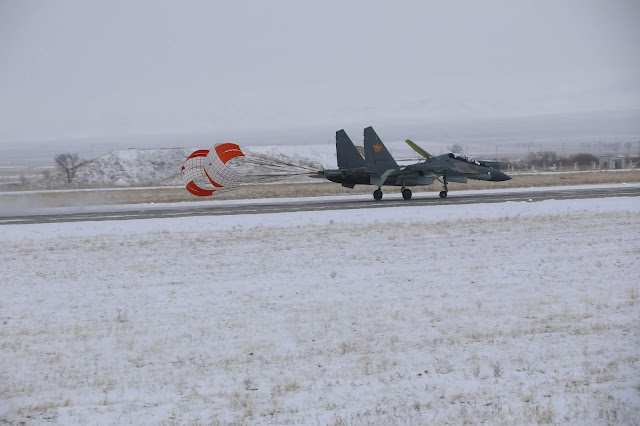 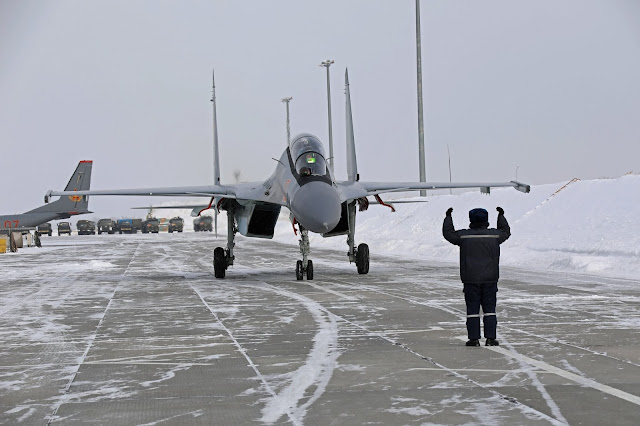 Kazakhstan has taken delivery of four Su-30SM fighters recently. Kazakhstan has an order for 24 such examples. So far, 12 have been delivered.
mod.gov.kz
Publicado por Miragec14 No comments: 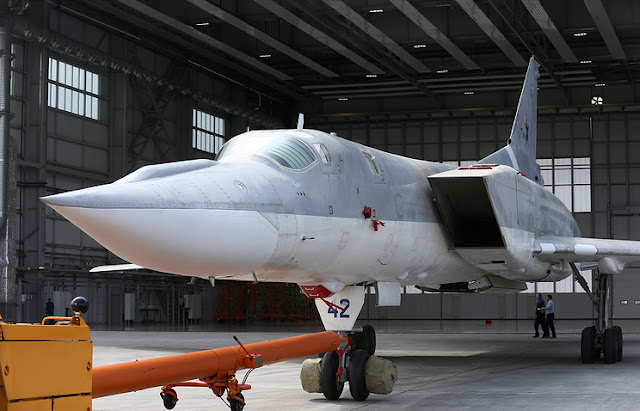 Russia’s latest modernized Tupolev Tu-22M3M long-range missile-carrying bomber has performed its debut flight.
The first upgraded Tu-22M3M made the debut flight from the airfield of the Kazan-based Gorbunov Aircraft Enterprise.
This flight started the missile-carrying bomber’s flight tests. There were no weapons aboard the aircraft and the flight was brief.
The Tu-22M3M was rolled out by the Gorbunov Aircraft Enterprise on August 16.
Until now, the bomber was undergoing a series of ground-based tests, during which specialists were checking its new onboard radio-electronic equipment, carrying out the ground-based engine runs and testing compatibility of the aircraft’s artificial intelligence elements.
Russia’s United Aircraft Corporation earlier said that the upgrade of operational Tu-22M3 planes to the level of the Tu-22M3M would begin from 2019 and the first serial-produced bombers would start arriving for the troops from 2021.
According to the data of the Tupolev Aircraft Company, the Tu-22M3M features considerably greater combat potential, including the enlarged operating range.
tass
Publicado por Miragec14 No comments: 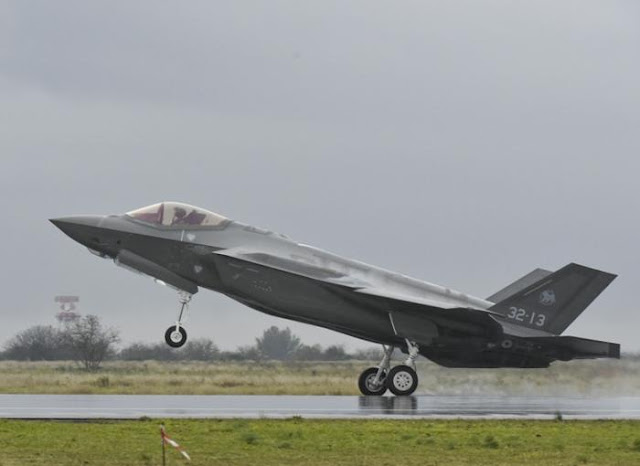 Italian Air Force F-35 fighter jets have reached initial operating capability, Gen. Alberto Rosso, the country’s Air Force chief, said Nov. 30. The announcement marks the first time the aircraft has achieved the milestone in Europe.
Officials broke the news at Italy’s Amendola Air Base in southern Italy, where eight Italian F-35s are stationed, and the announcement coincided with the staging of the latest edition of the 10-nation Tactical Leadership Program — a course for mission commanders. The course is regularly held in Spain, but was moved to Amendola to help with the debut of the Italian F-35s in the program. That program involved 50 aircraft and the participation of Italy, Spain, Denmark, Germany, Greece, Belgium, France, Holland, the United Kingdom and the United States.
defensenews
Publicado por Miragec14 No comments: 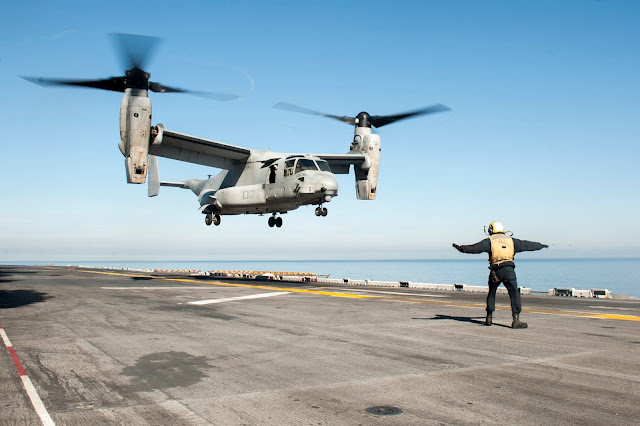 The US Navy (USN) has begun the transition from the C-2A Greyhound carrier onboard delivery (COD) aircraft to a modified variant of the Bell-Boeing MV-22 tiltrotor with the commissioning of Fleet Logistics Multi-Mission Squadron 30 (VRM 30) as its first CMV-22B squadron.
The USN in 2015 selected the CMV-22B tiltrotor to meet its Airborne Resupply/Logistics for Seabasing (AR/LSB) requirement, eschewing the alternative option of a life extension for the legacy C-2A Greyhound COD aircraft. Naval Air Systems Command (NAVAIR) awarded the Bell-Boeing Joint Project Office a USD151 million contract in March 2016 for nonrecurring engineering associated with CMV-22B development/engineering change proposal (ECP) embodiment.
According to the navy, the CMV-22B acquisition approach is based on the re-use of a mature platform - in the shape of the MV-22B Block C aircraft - adapted with ECP modification to integrate a series of navy-specific subsystems/requirements: the ECP will add extended range capability with aft/forward external conformal fuel tanks on wings and sponsons, a public address system for use while transporting passengers, fuel jettison capability, cargo bay and loading ramp lighting, and secure beyond-line-of-sight communications with a high frequency (HF) radio.
janes
Publicado por Miragec14 No comments: 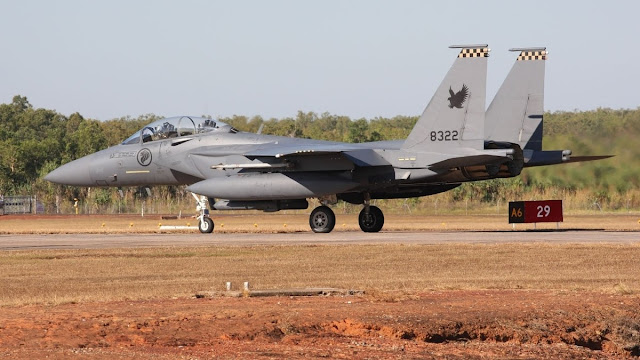 A proposal to base Singapore jets at Ōhakea has been rejected because of infrastructure problems at the airbase.
Minister of Defence Ron Mark said both sides concluded the proposal could not proceed, as without significant spending Ōhakea could not host the F15 squadron.
Mark said the concept had received strong support from local and central government and he was disappointed at the outcome.
"I took a hard look at official advice on multiple aspects of the proposal throughout the year."
stuff.co.nz
Publicado por Miragec14 No comments: 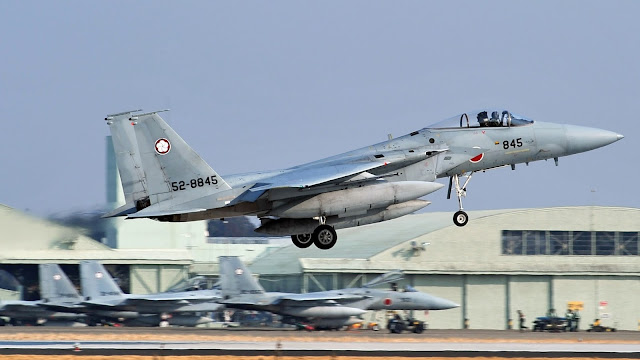 The Japanese government is considering selling some F-15 jets to the U.S. to raise funds for purchases of cutting-edge F-35 stealth fighters, Nikkei has learned, with Washington in turn weighing the sale of those outdated planes to Southeast Asian countries.
Several Japanese officials have revealed that discussions are underway for what would be the nation's first sale of used defense equipment to the U.S. Tokyo sounded out Washington on the possibility of such a sale as part of negotiations to purchase 105 F-35 jets from the U.S. The two sides are trying to iron out such details as the number of F-15s to be sold and their prices.
By arranging such a sale with Washington, Tokyo hopes to quell public criticism of expanding defense spending amid efforts for fiscal consolidation. Turning to Washington would also help Japan, as it lacks experience in selling defense equipment to third countries.
Japan's roughly 200 F-15s form the core of the Air Self-Defense Force's air defense capabilities. About half the fleet has undergone modernizing overhauls, including updates to electronic equipment, but the 100 or so fighters being eyed for a sale are an older design that cannot receive the electronics upgrades. The government decided at a cabinet meeting last Tuesday to gradually swap these out for more capable F-35s.
nikkei
Publicado por Miragec14 No comments: 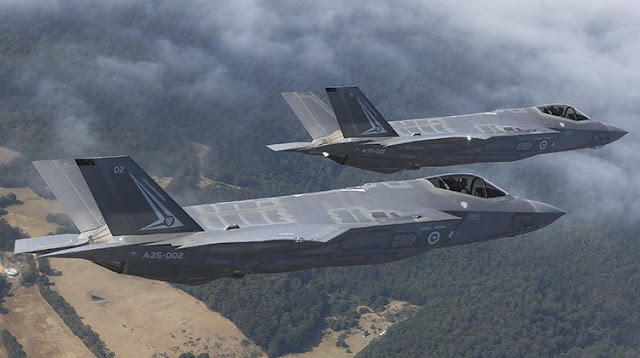 The F35s have been a while coming and not without plenty of controversy. Now this week the first two RAAF F35s are headed for their new home in Australia.
Australia is eventually getting 72 F35s over the next five years and at $125 million each, Australia gets what is considered the most lethal warplane ever built.
www.9news.com.au
Publicado por Miragec14 No comments: