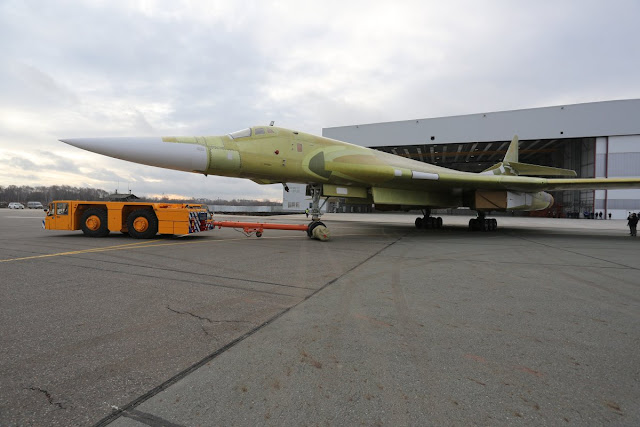 The first Tu-160M2 supersonic strategic bomber was rolled out at the PJSC ‘Tupolev’ Gorbunov Aircraft Plant’s factory in Kazan, Russia, on 16 November.
The aircraft is built around an incomplete Tu-160, likely to be one of the three airframes placed in storage in the early 1990s. One of these airframes, RF-94115, is in service with the Russian Air Force at Engels Air Base, close to Saratov, flying with the 2nd Aviation Group’s 6950th Aviation Brigade. This airframe was removed from storage and completed to the basic Tu-160 standard, becoming operational in 2008. Another airframe arrived in Kazan in 2009, and there is a strong possibility that it is this aircraft that was used for the Tu-160M2 roll out. The location of the third airframe is unknown at this time.
Three operational Tu-160s have been modernised to Tu-160M standard, and it is possible that the remaining airframes in line for an upgrade will receive Tu-160M2 specifications, which will reportedly take place at the same time as the building of new airframes. The only comparable difference between the M and M2 standard is the new Kuznetsov NK-32-2 turbofans. However, funding may make this impossible and
Tony Roper - IHS Jane's Defence Weekly
UAC_Russia_eng
Publicado por Miragec14