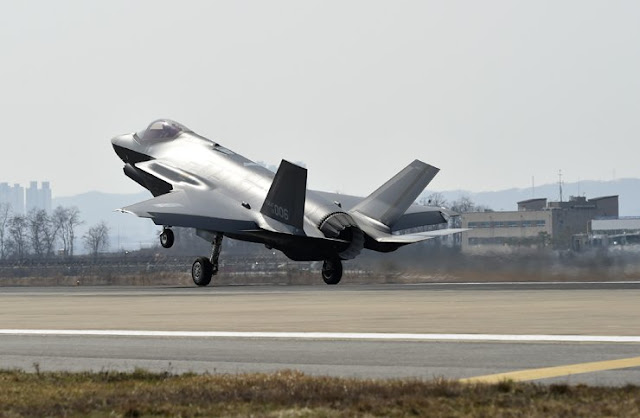 The first two F-35 stealth fighter jets for South Korea arrived at 2:35 p.m. Friday at a military air base in Cheongju, North Chungcheong Province.
The arrival came after the United States approved a plan to export Lockheed Martin's latest F-35 jets to South Korea. South Korea had agreed to buy 40 F-35A stealth jets. The complete delivery of the jets will be done by 2021. In 2014, the Republic of Korea Air Force (ROKAF) clinched the deal, which has a value of 7.4 trillion won ($6.5 billion).
The first batch of the jets departed from Luke Air Force Base in Arizona on March 22 (local time). After maintenance and technical checks, the jets will go into operation in April or May, according to the Defense Acquisition Program Administration (DAPA).
Eight more F-35As are expected to arrive in South Korea by the end of this year. The arrival of the stealth jets helped the country join the ranks of Asia's few radar-evading warplane operators that include China, Japan and Russia.
koreatimes
Publicado por Miragec14