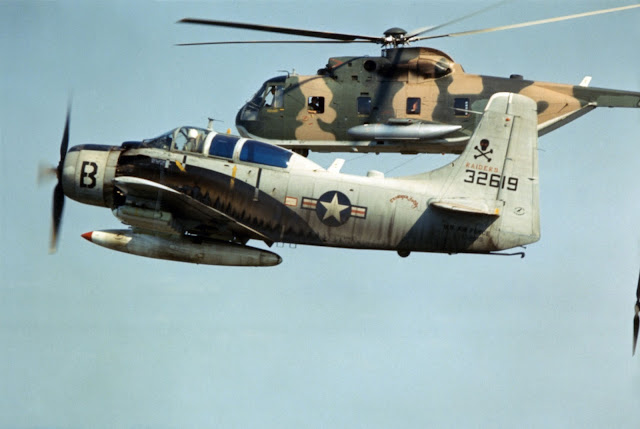 The Air Force’s ongoing interest in adding a fleet of light-attack aircraft to its arsenal is a reminder that, sometimes, slower and cheaper can be better.
Half a century ago, the Air Force’s legendary A-1E Skyraiders — affectionately known as Spads, after a wood-and-wire World War I fighter — proved their mettle in the skies over Vietnam, providing close-air support for American and Vietnamese troops on the ground.
Air Force leaders now see a similar need for a low-cost, slower-moving aircraft for counter-insurgency, close-air support, and aerial reconnaissance missions in low-threat environments. The idea would be to use them against the Islamic State and other terrorist groups in the Middle East and Africa.
The purchase of low-end attack aircraft, which could take off and land on shorter runways, would also reduce the wear and tear on state-of-the-art fighters deployed to the Middle East, extending the lives of those airframes.
In August, Air Force pilots at Holloman Air Force Base, New Mexico, flew four different light attack aircraft in series of flight demonstrations to test how well the aircraft could perform in a desert environment. The planes tested include the A-29 Super Tucano by Sierra Nevada Corp. and Embraer; the AT-802L Longsword from L3 Technologies and Air Tractor; and the the AT-6 Wolverine turboprop and Scorpion, both made by Textron. The Scorpion is the only jet in the mix.
airforcetimes
Publicado por Miragec14