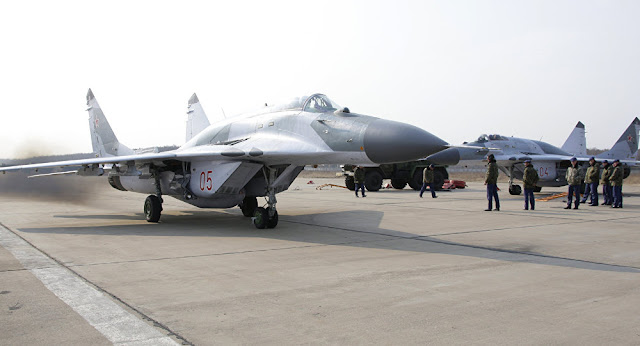 A transport plane has delivered two Russian MiG-29 fighter jets to Serbia, the initial shipment of a six-jet deal that could add to East-West tensions in the Balkans.
The warplanes arrived disassembled aboard a massive Antonov An-124 transport plane that landed at a military airport in the Belgrade suburb of Batajnica on October 2.
The MiGs are being provided by Moscow at no charge, but their assembly, repair, and refurbishing costs are expected to near $235 million in total.
The four other jets are set to arrive sometime before October 20, when they are likely to be displayed in Belgrade during a Liberation Day parade. Russian Defense Minister Sergei Shoigu is scheduled to attend.
In March, Serbia’s Aleksandar Vucic, then prime minister and now president, confirmed earlier reports that Russia would provide the six MiG-29 fighters "as a gift."
He added that the planes would enter military service by the end of 2017 after refurbishing and pilot training.
Russia also committed to provide 30 T-72 tanks and 30 BRDM-2 patrol combat vehicles to Serbia for free.
Vucic said on October 2 that Serbia also planned to improve its defenses and has been negotiating with Moscow for the purchase of Russian-made S-300 antiaircraft systems.
rferl
Publicado por Miragec14