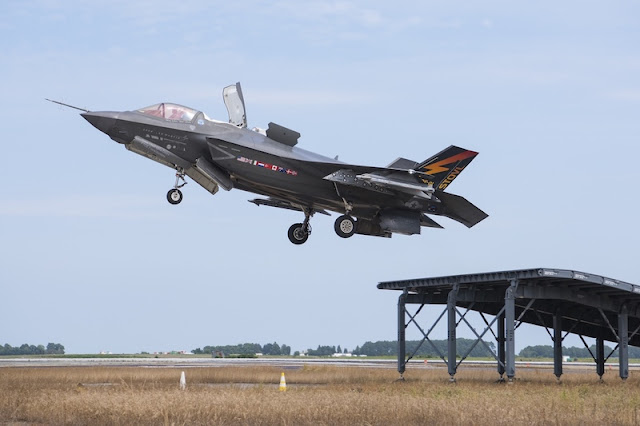 The UK Ministry of Defence has cleared the F-35 Lightning II fighter jet for take-off from the deck of the Royal Navy's Queen Elizabeth-class aircraft carrier, HMS Queen Elizabeth.
The clearance follows successful completion of ski-ramp trials on-board the British flagship vessel.UK Defence Minister Harriett Baldwin said: “Successful ski-ramp trials mean the F-35 is cleared to fly from the carrier as the momentum continues for this game-changing jet.“This milestone comes as our pilots and planes prepare to return from the US, ready for next year’s unforgettable flight trials from the deck of the nation’s new flagship.”
Baldwin confirmed that the F-35 Integrated Test Force, which includes five pilots from the UK, has successfully completed the ski-ramp trials milestone.
The British Royal Navy currently possesses 12 F-35 aircraft in the US, which are being tested ahead of a series flight trials slated for next year. An additional two aircraft are also scheduled to be delivered by the end of the year.
The trials will be carried out from the navy’s 65,000t HMS Queen Elizabeth aircraft carrier.
Prime contractor Lockheed Martin has designed the F-35 fighter jet to allow it to combat and defeat the most advanced threat systems both in the air and on the ground, in addition to those expected to emerge in the future.
As a fifth-generation fighter, F-35 is equipped with advanced stealth capabilities, enhanced agility and manoeuvrability, sensor and information fusion, network-enabled operations and advanced sustainment.
The aircraft also features the latest technology that provides greater survivability, situational awareness and effectiveness for pilots, along with improved readiness and reduced support costs.
naval-technology
Publicado por Miragec14