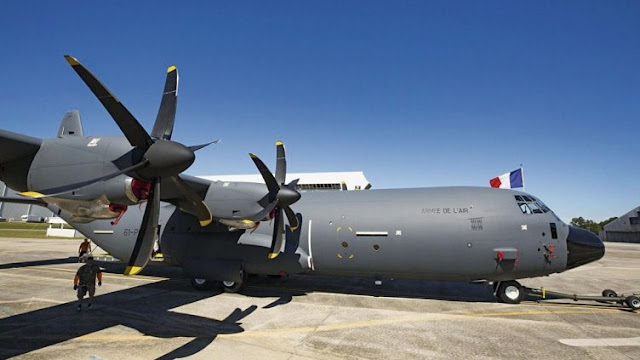 The first of four Lockheed Martin C-130J Hercules transport aircraft for the French Air Force was rolled out from the Marietta production facility in Georgia on 20 October.
The aircraft was rolled out in front of the cameras for the first time after being painted in national colours and markings.
France has ordered two C-130J-30- and two KC-130J-variant aircraft for a combined USD170 million, that includes configuration changes to the former. The contracts are expected to be complete by 30 August 2020.
The French Air Force is purchasing four C/KC-130J aircraft to supplement its ageing Transall C-160s, and to compensate for delays to the Airbus Defence and Space A400M transport aircraft and the low availability of its current fleet of C-130Hs.
The rollout of the first aircraft came just two days after the deputy chiefs of defence staff of France and Germany agreed details of the countries joint C-130J squadron. Under the agreement, a joint air transport squadron consisting of four French and six German C-130Js based at the French airbase in Évreux, Normandy, will be set up, with initial operational capability scheduled for 2021 and full operational capability due in 2024.
janes
Publicado por Miragec14