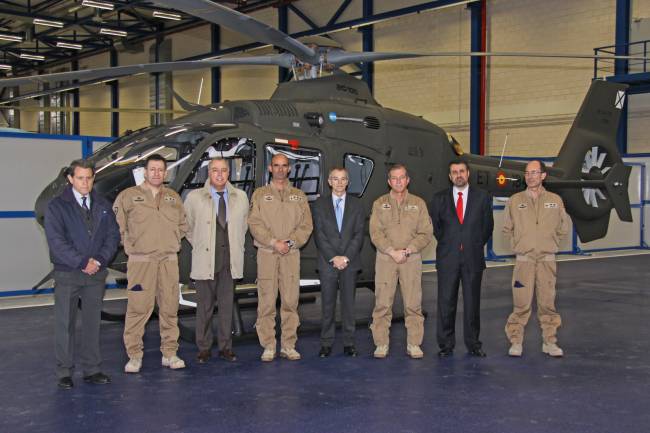 Airbus Helicopters’ factory in Spain provided the setting early this week for the delivery of the two EC135 helicopters to the Spanish Army Airmobile Force (FAMET). The aircraft were the first to be delivered as part of a contract for eight EC135s signed on December 27.
The contract also includes a logistics package that will support fleet sustainability in the coming years. The remaining six helicopters will be delivered during the course of 2014, and will also be allocated to the CEFAMET Helicopter School Battalion. These two new units bring the Spanish Ministry of Defense’s total fleet of EC135s to 16 helicopters, making it the world’s leading operator of the EC135 for military use, which is also operational in countries such as Germany and Japan.
The new aircraft will meet the Spanish Army’s pressing need to provide its combat pilots with advanced training in tactical missions. Involving the use of night vision goggles and instrument flights, this training prepares pilots to perform maneuvers and combat missions in larger platforms such as the Cougar, Tiger and the NH90.
airbushelicopters
Publicado por Miragec14